The familiar sound of ringing bells welcomed Michigan policy makers back to school on Monday morning–this time for a tour of addalingua partner programs. Continuing the conversation we began in August, several of the state’s top education policy makers started their day with classroom observations in the two-way Spanish immersion program at Holland West. Guests included representatives from Governor Snyder’s office, the Michigan legislature, and the Department of Education. What came through very clearly was the power of dual language immersion education for both minority and majority language dominant students.

“The fact that the students were conducting their activities in Spanish independent of [their teacher] prompting them was a major sign of success.” – Stacey Vanden Bosch, addalingua co-founder

Superintendent Brian Davis gave guests an overview of the ways in which the school’s two-way Spanish immersion program has positively impacted student academic achievement, helped to reverse a multi-year trend of declining enrollment, and played a significant role in moving Holland West off of the MDE’s list of Focus Schools this year. Two-way immersion classrooms at Holland West are made up of nearly 50% minority language-dominant students. During kindergarten and 1st grade, 90% of all instruction is delivered in the immersion language (Spanish). Instructional time in English gradually increases in subsequent grades.

As counterintuitive as it may seem, this emphasis on instructional time in Spanish across content areas is resulting in higher academic achievement in both Spanish and English for majority and minority language-dominant students. West’s program has been so well-received by the community that Holland Public Schools will be opening a K-7 immersion school in Holland’s core city next year to meet growing demand.

Suffice it to say, we love watching our partner programs grow under leadership that’s committed to the three-fold goal of dual language immersion education: high academic achievement, proficiency in the immersion language, and cross-cultural competency. If we could simultaneously tip our hats, salute, and applaud the dedicated team of teachers, administrators and parents at Holland West and Zeeland Christian, we would.

“Using addalingua is an investment in professional development, but is one that is paying off in student achievement.” – Dr. Brian Davis, Superintendent of Holland Public Schools

As Lilah Ambrosi highlighted in our recent webcast on features of a quality dual language immersion program, Zeeland Christian has done some remarkable things to help elevate the status of the immersion languages in their school. Tour guests noted signage on the walls in multiple languages, and in the words of Principal Bill VanDyk, a commitment by school leadership to “pop the bubble within the bubble” and integrate the immersion instructors and students fully into the life of the school. 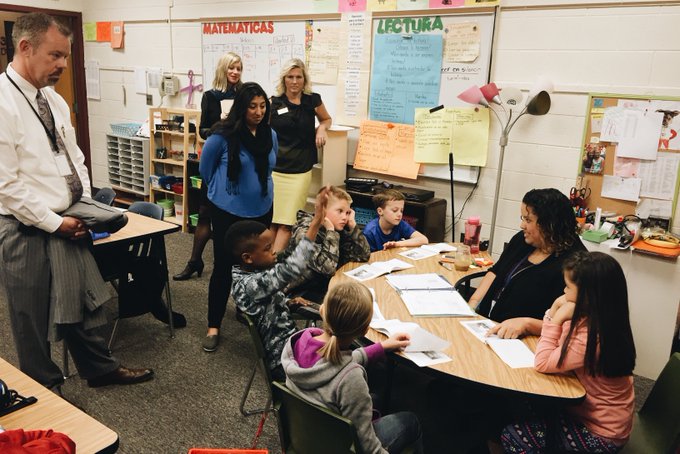 The program observation concluded with a working lunch at Zeeland Christian School in which participants discussed potential ways to address the growing need for highly qualified dual-language immersion instructors and the creation of a Michigan seal of multiliteracy for high school graduates. We believe efforts to advance and sustain dual language immersion education will be vital in the effort to help Michigan become a top ten education performing state.

We want to extend our special thanks to Holland West and Zeeland Christian for their kind hospitality during the program observation and for their continued commitment to quality dual language immersion education. Thanks also to the Holland Sentinel’s Amy Biolchini for joining us and for getting capturing the morning so well in print and photos.

If you’d like to learn more about add.a.lingua’s services or advocacy efforts on behalf of dual language immersion education, please get in touch