Right out of the gate, State Superintendent Brian Whiston is looking at the big picture. With a horizon of ten years, he and the State Board of Education are hoping to position Michigan as a Top Ten state for education.

When we think about how education in the state of Michigan will need to change over the next decade to make sure students are prepared to face the global war for talent, we think language. As information becomes more and more available via technology, classroom instruction needs to help develop problem-solving and communication skills.

Effectively implemented dual language immersion programs not only inherently foster those relevant problem-solving skills, they also promote multilingualism, cross-cultural sensitivity, and high academic achievement. If Michigan students are to become adults who successfully participate in a global economy and an increasingly multilingual society, state-level support for quality dual language immersion education would be a bold, strategic move. If students around the world are learning more than one language, why not Michigan students too?

As U.S. and international studies continue to demonstrate, effectively implemented dual language immersion programs meet the needs of both majority and minority language students, allowing them to achieve academically in two languages at no cost to their English literacy development. Although seemingly counterintuitive – students who learn academic subject matter in more than one language often outperform their traditionally educated monolingual peers.

That’s why we’re urging our allies in language education to encourage the State Board of Education to make academic achievement and global competence through quality dual language immersion programming a priority. In our ever-changing, increasingly connected world, we believe every Michigan student should have the opportunity to graduate proficient in more than one language – prepared to take on the world.

Language is inextricably entwined with our mental life,? our perceiving, our remembering, our attending, our comprehending, our thinking?, in short, all of our attempts to make sense of our experience in the world?. (Lindfors, 1991, p. 8), (Clark, 2000).

Join addalingua in calling on the State Board of Education to addalanguage and make Michigan a top ten education state. 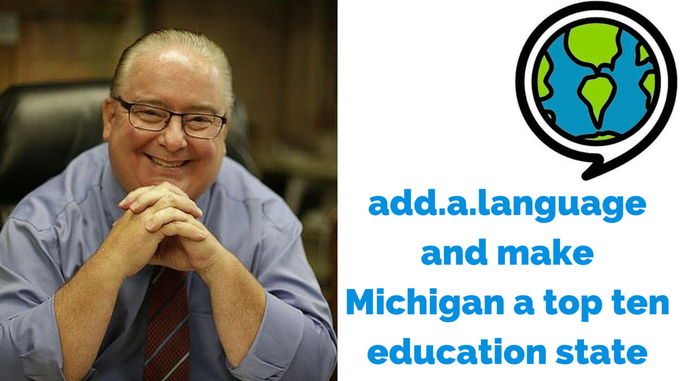 Michigan can expedite the adoption of dual language immersion education by…